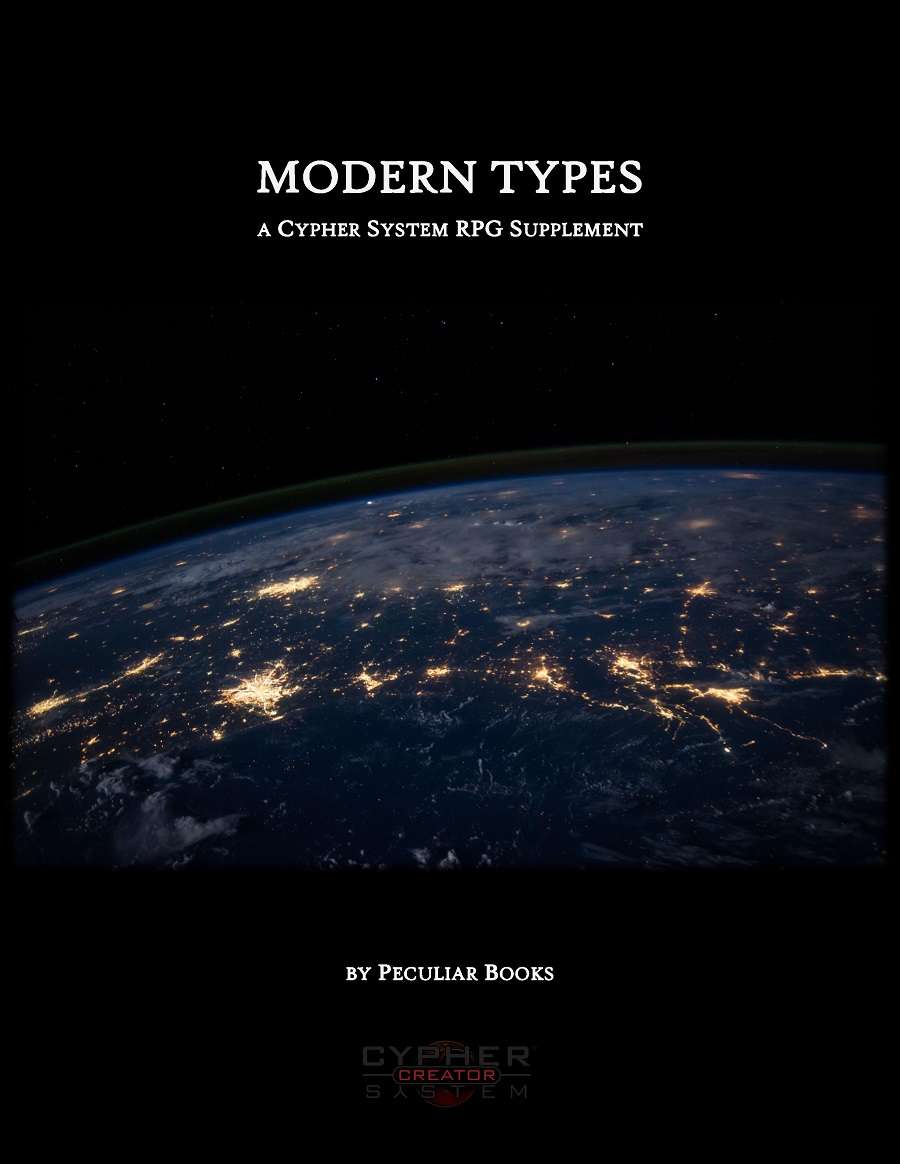 Retail Price: $3.99 for the a digital copy at DriveThruRPG

One of the best parts about the Cypher System is how customizable the various elements are. Most notably, the key components of character creation (descriptor, type, and focus). While the standard options are generally solid and serviceable for most games and genres, in some cases they can strain credulity or break immersion. While types and descriptors can easily be dealt with by limiting what is available. Things get a bit tricky with regard to types, which are in many ways a character’s nucleus. Types, in some ways, set the tone for what a games is. While it is worthwhile in many cases to tailor types to a game, this does take time and energy that would perhaps be better spent on things like planning adventures. In the case of modern games, this where is Modern Types from Peculiar books comes in. It takes off some of the pressure in terms of running and playing a game set in the “the modern day” be offering prebuilt setting/time period appropriate types.

Modern Types introduces six new types that are intended to take the place of the standard four, and are tailor made for games with a modern era setting (18th century, post  age of Enlightenment to today according to the book). The new types are academic, athlete, investigator, occultist, professional, and soldier. All of these type have the same starting stat value spread of 10, 8, 12, though the order varies between types, with an additional six points to customize a character’s starting pool. In addition each of the types have a starting edge of 1 in two different stats. Beyond this, each of these types are composed of unique mixes of abilities taken from the existing types and flavors that on the whole serve to build a reasonable suite of options for the type’s given theme. For example, a tier 1 athlete starts with Endurance (Explorer tier 1) and has access to abilities such as Encouragement (Speaker tier 1), and Physical Skills (Warrior tier 1). As they progress the athlete also gains access to some abilities form the combat and stealth flavors. All of the modern types over the course of their advancement will end up with 15 types abilities from just tier advancement. Compare this to the exiting types: 11 type abilities (adept), 16 type abilities (warrior), 17 types abilities (speaker), and 19 type abilities(explorer). I do like the that overall the modern types will have less abilities by tier six and that they all have the same number. While some of the modern types are somewhat less diverse in their abilities than others, overall they do all end up with more diverse ability options than their predecessors while still keeping in an identifiable theme.

Beyond the types, there are two additional components this book that are worth mentioning. First, the book includes flavor text that forms a miniature narrative of a group investigating a spooky house. Each of the types is prefaced by a section of this story that serves to illustrate an example of characters of type. One example is “Ramon Brooks, a Calm Academic who Helps Their Friends”. This character’s story blub shows him setting up shop in the house’s kitchen and working at directing the group’s investigation using information on the house such as a floor plan. Second, in addition to a brief commentary on modern games, Modern Types gives some rules advice including starting equipment, and recommendations on cyphers and assets.

Would I Recommend This Product?

Before answering this question, I would like to note that this supplement was written before the Revised Cypher System rulebook was released. So either the original rule book would need to be referenced for the full descriptions of abilities, or a little extra effort to find them in revised rulebook would be needed.

Overall I do recommend Modern Types as a resource for anyone running a game set in the modern era. However, I do have a minor complaint. The modern types are more “durable” than their core counterparts. Each has a starting edge of 1 in two stats (compared to the 1 stat of original types ). Additionally, totaling all of their pools, they have a starting pool total of 36 compared to the 34 of their predecessors. To be honest, I would have expected the modern types to seem less “heroic”, having at the very least smaller starting pools than the original types. This gripe aside, for games running in a modern setting Modern Types by Peculiar Books is a resource worth looking into.